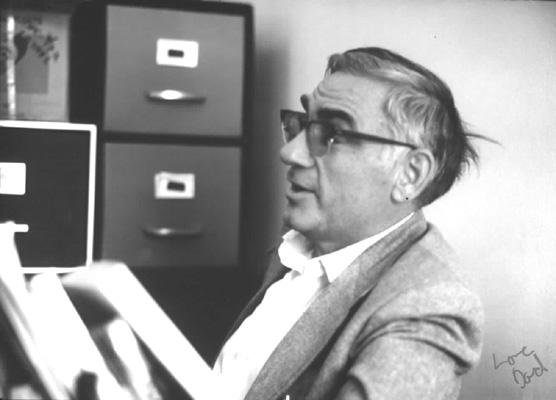 George Agogino, anthropologist, archaeologist, hominologist, cryptozoologist, was a friend of Carleton Coon, Tom Slick and Ivan T. Sanderson. George served quietly, in the 1950s and 1960s, on Slick’s board of consultants assembled to review the hominological and cryptozoological material coming out of Nepal and the PNW.

I was lucky to have also known George, and appear with him on the 1991 NBC-TV’s “Unsolved Mysteries” segment on the “Pangboche Hand.” He sat with my son Malcolm, who was five at the time, for over three hours, talking to Malcolm calmly about anthropology and Yeti, as the NBC-TV crew filmed me. It was a wonderful interaction that my son has never forgotten, nor have I, of course. As we walked back to the studio car, George and I talked of his and Carleton Coon’s work for the CIA. He was always full of surprises.

I was sad to learn recently that he had passed away.
–Loren

The Agogino family has given me permission to post the following:

Dr. George Allen Agogino died at his home early Monday morning, September 11, 2000, after a three-year battle with cancer. He was 79. He came to Portales in 1963 to lead a summer excavation at the Blackwater Draw archeological site; he stayed to create the Department of Anthropology at Eastern New Mexico University, which he chaired for eleven years. He was the founding director of the Blackwater Draw Museum which he designed and found the resources to build. In 1989 he was selected to be a New Mexico Eminent Scholar by the Governor. He retired as Distinguished Research Professor in 1991.

Between graduating from Overbrook High School in Philadelphia, Pennsylvania, in 1940 and volunteering for service in WWII in 1943, he was employed by the Lehigh Valley Railroad Company to examine the accuracy of conductors’ reports. In WWII he was a member of the Signal Service Group in the Southwest Pacific Theater of Operations where he was a high-speed radio operator, sending and receiving code signals. He was also placed on detached service to reconnoiter remote New Guinea villages for Japanese presence. After the Allied occupation of Japan, he was assigned to Tokyo headquarters under General MacArthur.

With a BA in Anthropology and an MA in Sociology from the University of New Mexico, he began his teaching career at Nasson College in Maine. He also taught while he completed his Ph.D. in Anthropology at Syracuse University. His inspiring teaching and prolific research career included positions at the State University of South Dakota, the University of Wyoming, and Baylor University in Waco, Texas. He was also a post-doctoral research appointment at Harvard University. He published more than 600 articles and chaired numerous sessions and presented many papers at professional meetings. While he is best known for his contributions to Paleo-Indian archeology, he had broad interests including the ethnology of the Southwestern U.S.; Mexican archeology, ethnology, and history; forensic physical anthropology, and the supernatural. He was a fellow of the American Association for the Advancement of Science, the American Anthropological Association, and the Royal Anthropological Association of England. He was selected for membership in the Explorers Club in 1980 and for inclusion in Who’s Who in America (1988 to 1997) and Who’s Who in the World (1991-1992).

His selection as a member of the US Olympic track team for the 1940 summer Olympics (canceled due to the war in Europe) was a high point in his athletic career, which included three national high school indoor track team championships at Overbrook High School and organizing and running on the University of New Mexico cross country track team. He combined his exceptional athletic ability with his capacity to lead and inspire to coach college baseball and basketball. He continued to compete in sports, particularly tennis, well into his retirement.

He had a lifelong love of music, which he pursued for over sixty years. He started playing guitar and singing with his strong, beautiful voice at a young age. He played with Pete Seeger in 1946. His most recent musical activity was singing at services at the Central Christian Church.

Dr. Agogino was fascinated by “the unexplained” and worked with Ivan T. Sanderson and others to lend his expertise in physical anthropology to analyze evidence of what has been called the Yeti, Big Foot, Abominable Snowman, and Sasquatch. Here is the Forward he wrote for Ivan T. Sanderson’s book Abominable Snowman:Legend Come to Life in 1961. Here is a 1969 article from Argosy Magazine, “The Minnesota Iceman Story”, followed by an article written by then Argosy Science Editor Ivan T. Sanderson titled: “The Missing Link?” The Society for the Investigation of the Unexplained, of New Jersey, U.S.A., May 1969. pp. 23-31. Over the years, as all of the evidence sent to Agogino appeared to be either fraudulent or of some known species, Agogino came to the conclusion that it was unlikely that any such creature could continue to exist now that most of the land masses of the earth have been explored. He was recently featured on the “unexplained mysteries” television program with the negative results from DNA analysis of an ancient finger specimen obtained from a monastery in the Himalayas.