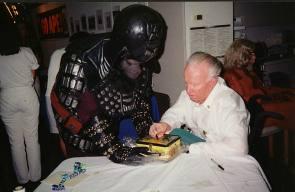 John Chambers, who once created a Bigfoot carnival prop and was rumored to be behind the Patterson-Gimlin Bigfoot footage, died of diabetes complications, 25 August 2001, at the Motion Picture and Television Fund retirement home in Woodland Hills. He was 78.

For years, a rumor had circulated that Chambers, famed Academy Award-winning Hollywood special effects man, manufactured the suit allegedly worn by the Bigfoot pictured in the famed Patterson-Gimlin Film which spawned renewed interest in the creature.

The controversy peaked on the thirtieth anniversary of the filming when press accounts from around the world recycled this rumor without benefit of a personal interview with Chambers. Typical of the headlines is one that appeared in London’s Sunday Telegraph for October 19, 1997: “Hollywood admits to Bigfoot hoax.” The article, timed to the anniversary of reads in part: “A piece of film, which for 30 years has been regarded as the most compelling evidence for the existence of Bigfoot, the North American ‘abominable snowman’, is a hoax, according to new claims. John Chambers, the man behind the Planet of the Apes films and the elder statesman of Hollywood’s ‘monster-makers’, has been named by a group of Hollywood make-up artists as the person who faked Bigfoot.

“In an interview with Scott Essman, an American journalist, the veteran Hollywood director John Landis…said: ‘That famous piece of film of Bigfoot walking in the woods that was touted as the real thing was just a suit made by John Chambers.’ He said he learned the information while working alongside Mr Chambers on Beneath the Planet of the Apes in 1970.”

But the truth of the matter apparently lived beyond the Hollywood rumor mill.

On October 26, 1997, California Bigfoot researcher and nurse Bobbie Short interviewed Chambers, then living in seclusion in a Los Angeles nursing home. The make-up artist insisted he had no prior knowledge of Roger Patterson or Bob Gimlin before their claimed Bigfoot encounter on October 20, 1967. He also denied having anything to do with creating the suit, and blamed the Hollywood rumor mill. Chambers went on to say that he was “good” but he “was not that good” to have fashioned anything nearly so convincing as the Bluff Creek Bigfoot.

As stated in the press at the time, the well-known movie director John Landis claimed that Chambers not only made the Patterson suit but helped make the film. For just as long people have pointed to Landis as the one from whom they heard the story, not Chambers. But Chambers himself said the only Bigfoot he made was the “Burbank Bigfoot,” a large stone prop intended to imitate a real Bigfootlike creature and used for a carnival tour. Some even speculated that Chambers was involved with constructing the Minnesota Iceman, shown in Midwestern state and stock fairs by Frank Hansen, beginning in 1967. The Burbank Bigfoot, however, appears to be the only “Bigfoot” Chambers ever created.

John Chambers is best known, however, for designing the anthropoids in the original “Planet of the Apes.” When he worked on “Planet of the Apes” in the 1960s, Chambers recalled in a recent Assoicated Press interview how he spent hours at the Los Angeles Zoo doing research.

“It was the best way I could think of for capturing the elastic facial expressions of the apes,” he said.

The Associated Press noted that his preparation led him to develop a new type of foam rubber that was easier to work with than the material commonly used at the time. He also created facial appliances that could be attached to actors’ faces to form primate features. For his efforts he became only the second makeup artist to receive an honorary Academy Award. A competitive category for makeup was established in the 1980s.

Considering the timing of the filming of the Patterson-Gimlin footage in 1967, many skeptics of the film naturally looked to Chambers as the source of the fully-haired upright primate in the film. Critics of the film’s debunkers would later point out that the original “Planet of the Apes” costumes were not full-body suits, but mostly rigid facial and upper torso gear.

Intriguingly, Chambers’ first of only a few acting appearances was in a 1971 movie about a California Bigfoot that terrorized co-eds. The film, “Schlock” was directed by John Landis, who also played the film’s very thin Bigfoot. Chambers played the National Guard Captain in the film. Chambers’ student, Rick Baker, who one day would create Harry in “Harry and the Hendersons,” did the makeup and created the Bigfoot in Schlock.

John Chambers’ name will forever be linked to Bigfoot, no matter the realities behind the rumors.