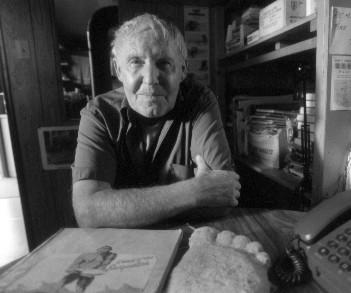 One of the greatest hominologists (those who study Sasquatch, Bigfoot, Yeti, and other unknown hominioids) of the modern era died at 8:40 PM Pacific Daylight Time, on 18 April 2001, in British Columbia.

Born in Switzerland, Rene Dahinden moved to Canada in 1953. Two months after he arrived, he heard about the Sasquatch and within three years was conducting serious research on the hairy primates, sometimes with British Columbian researcher and chronicler John Green whom Dahinden met in 1956. Since then Dahinden conducted numerous field investigations throughout the Pacific Northwest, interviewed many witnesses, and examined apparent physical evidence for the legendary creature.

Dahinden was the first to show the Patterson-Gimlin Film (taken on October 20, 1967 at Bluff Creek, California) of a Bigfoot in the former Soviet Union, and he worked hard to see to it that the film got the scientific attention he felt it deserved. In recent years, with Dahinden’s acquiring of the photographic images of the Patterson-Gimlin Film, some of his time was occupied in technical legal and copyright affairs.

His only book, Sasquatch (McClelland & Stewart, 1973; republished as Sasquatch/Bigfoot, Firefly, 1993), was written with Don Hunter.

In the Hollywood Bigfoot family movie comedy Harry and the Hendersons (1987), the Sasquatch hunter, a character played by David Suchet (better known to television viewers through his BBC/PBS Mystery series role as Belgian detective Hercule Poirot), was loosely modeled on Rene Dahinden.

Dahinden was open and friendly, entertaining and interviewing researchers from around the globe. He traveled to San Francisco to visit me in 1974, and I was touched by his humor, insights, and encyclopedic knowledge of the field. He will be missed by cryptozoologists worldwide.