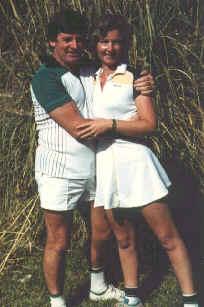 Ronald Bremner died from multiple cancers on December 1, 2001. Born in 1941, during the second world war, to hoteliers Jean and Willie Bremner, Ronald Bremner was their only son. When Bremner’s father died, his son took on the running of the Drumnadrochit Hotel and oversaw the building of a new motor inn section which opened in 1979.

Bremner was always a topnotch sportsman, playing rugby, tennis, table tennis and golf to a high standard, according to his former partner Tony Harmsworth. Bremner and his wife Libby were tennis doubles’ champions of Inverness, Scotland, and his table tennis was to international standards. He loved golf and played to a short handicap. Gary Campbell notes, Bremner was a scratch golfer at age 18 and many felt that had he not followed his parents into the hotel trade, he could have been a pro.

In 1979, Bremner met Harmsworth who coordinated a darts championship for Bremner which saw several international players making the trip to Drumnadrochit on a weekly basis. Harmsworth did this in order to get Bremner’s ear over an idea he had for a Loch Ness Exhibition.

Within a short period it was agreed that Bremner would finance the exhibition and provide the buildings to the rear of the old Drumnadrochit Hotel, and Harmsworth would produce and run the exhibition. Harmsworth continued to work for Ronnie until 1990, improving the original exhibition. Then the exhibition planned its move into the derelict Victorian hotel building and the services of Adrian Shine were obtained as a consultant to the center. The lack of a written contract resulted in a misunderstanding which was forever to drive a wedge between Bremner and Harmsworth, and a cloud would remain over their relationship to the end – although it did mellow finally.

In the beginning, there were happier times. Bremner, in 1980, joined Harmsworth who designed and co-founded the concept, while Bremner provided the finances and buildings for the Loch Ness Monster Exhibition. Thus Bremner became the owner of the Loch Ness Center at Drumnadrochit, Scotland.

For Bremner, the new exhibition became a positive asset which provided security for Bremner and his family. He went on to franchise out the hotel and shops leaving the exhibition as the core business.

More recently Ronnie Bremner and his son, Robert (“Robbie”), developed the business further with the assistance of the local Enterprise company into one of the finest visitor attractions in Scotland. Their resources together with Adrian Shine’s services as consultant created one of Scotland’s more innovative educational exhibition experiences.

Bremner, reports Harmsworth, had a very generous heart and this was not always obvious to people who did not get to know him properly. Harmsworth remembers one occasion when a villager came to Bremner in desperation late on a Friday to get a check cashed to get matters arranged after his son had been killed in a road accident. This person was an aging father of a large family and was never particularly flush. Bremner wandered off into the bar of the hotel with the check, brought back the money (a substantial sum) and handed it to the villager together with the original check. Yet on another occasion, notes Harmsworth, he would throw a fit if a car park attendant was under-employed for 30 minutes! This was the nature of the man and it always made him a difficult person to “read.”

During my visit to the Center, in 1999, for the occasion of the first Cryptozoology Symposium to ever be held at Loch Ness, it was obvious that Bremner’s efforts, as well as those of the nearby younger rival site, had gone a long way in making Drumnadrochit the epicenter of cryptozoology.

In the last few years Ronnie Bremner and wife Libby moved to Edinburgh leaving Robbie Bremner to run their interests at the center. This semi-retirement gave them both some quality time together. However, the cancers overwhelming Bremner were unexpected and extremely fast moving. Towards the end, Bremner deteriorated quickly.

Tony Harmsworth reflects that Bremner’s passing is the end of an era at Loch Ness, but no-one can deny the impact of the exhibition center on everyone in the tourist industry at Loch Ness today. Bremner is sure to missed by the people of the glen.

On December 6, 2001, at 2:00 PM, local time, Ronald Bremner was buried at Kilmore cemetery, Drumnadrochit, Scotland, in the village’s largest funeral in sixty years. The funeral was a moving event with best friends, Ronnie Young and Bobbie Davidson recollecting their years of friendship. Robert and Michael Bremner spoke briefly, and Adrian Shine read a text by David Bremner and spoke of Ronnie’s involvement at Loch Ness and his dreadful habit of losing the keys to anything and everything.

[Photograph is courtesy of Tony Harmsworth, and specific details thanks to Harmsworth and Gary Campbell.]