If Bigfoots are real, why hasn’t anyone ever been able to capture one? 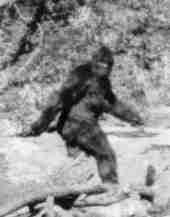 Actually, many Bigfoot-type creatures have been killed, caught or examined around the world, but no scientifically “good evidence” has yet been able to be brought back to help classify the animals. It took almost fifty years to find the first mountain gorilla after the first lowland gorillas were found; it took over 60 years to capture the first live giant pandas after scientists actually believed the giant pandas existed. Since the modern era of “Bigfoot” research began in 1958, we really are just at the beginning of our research, searching and hunting for them. Also, the famous “Minnesota Iceman” (of 1968) seems to have been a real body whose owner got scared he might get in trouble, and he switched it with a fake. Such things happen in chasing Bigfoots.

Why haven’t we ever found any of the bones or remains of Bigfoot?

The second question from the student is a good one – but think of this – how often do we find a dead bear or dead mountain lion in the woods? Almost never. Porcupines and rodents eat the bones of dead animals. And most dying animals hide themselves in caves, and other quiet places when they feel sick – and then die. We are not surprised we haven’t found any Bigfoot bones.

Have hair strands been found in the areas where Bigfoot has been sighted?

If so, what type animal hair is it similar to? Yes, some hair samples have been found, but all of them were not useful. Some “funny hair” hoaxes have occurred in Bigfoot country, with people trying to fake Bigfoot hair with moose hair and such. But other more authentic Bigfoot hair has turned up and been identified as only “unknown primate” or “near human.”

If it is real, what kind of animal do you think it has evolved from, an ape?

Some people like Dr. Grover Krantz think the Bigfoot is related to Gigantopithecus blacki, a giant ape commonly assumed to have died out several hundred thousand years ago. But I and a few other cryptozoologists think that the Bigfoot-Sasquatch types (and their relatives in China) are related to the fossil apemen, Paranthropus robustus, found from fossils, in Africa and Asia.

Do you think it migrated from Asia across the Bering Strait?

Have any been sighted in Alaska, for example? Virginia?

What other unknown animals have been discovered lately?

Many new mammals have been found in Vietnam in a jungle area called the “Lost World” with some new animals found in New Guinea and Nepal. The new monkey found in Nepal a couple months ago was living in the foothills of the Himalayas, near the homeland of the Yeti or Abominable Snowmen. Also go to http://perso.wanadoo.fr/cryptozoo/welcome.htm for more information on newly discovered animals, and more about cryptozoology.

If there are species of animals that have not been identified or found by humans, what areas of North America would they most likely be found?

Pacific Northwest, Ozarks, Appalachia, swamps of the South for the USA; most of Canada (except for a small strip along the US-Canadian border) is unexplored; north central Mexico

What other parts of the world might we discover new animals?

Too many to list but the most hopeful seems to be Vietnam’s “lost world” area, the Afgan-Pakistani border and central Africa.

Where and when did you start searching?

While I grew up in central Illinois, I have traveled and lived all over the US. I began doing my first cryptozoology field trips and library research in 1960, when I was just 12.

How do I get into the field of cryptozoology? Are there any classes taught on the subject?

This is one of the most frequent questions I hear. But I’m sorry to say that there are very few classes ever given in cryptozoology (I taught one in 1990) and no formal cryptozoology degree programs available anywhere. So my advice would be to pick whatever subject you are most passionate about (primates? felids? giant squids? fossil men?) and then match it up with the field of study that matches that subject (anthropology, zoology, linguistics, etc.). Pursue that subject, pick the college that is good in that arena, and you can develop your niche in cryptozoology and not go wrong. (I studied anthropology/zoology, and then moved on to more psychological graduate studies to understand the human factor.)

Do you have any books you have written that one might obtain directly from you?

What can you tell me about a Bigfoot Museum in Portland?

Of course, there are two Portlands, and there appears to be two museums in development. Portland, Oregon, has established a Roger Patterson Memorial Hall of Fame, as of October 1997. I was one of the first ten inductees. This is to be part of a future Museum being created by Ray Crowe’s Western Bigfoot Society. To date, it is still on the drawing table. I am in the beginning phrases of planning for a Rare Animals and Cryptozoology Museum to be created in Portland, Maine, by the year 2000. Artifacts, funding, ideas, exhibits, cryptozoo toys, and much more are welcome. Wanted plaster casts of footprints, from the East, from the West, internationally taken. Use the address above. Have an exhibit with your name on it – as the source of the donated item. Stay tuned for future details.

Are you available to speak on my radio program? At my college?

To my service club? Yes, I frequently am interviewed by radio program hosts. contact me with the details. I also will come to your college or service club. For those that are seriously interested in hosting one of my fascinating slide lectures on any one of several intriguing cryptozoological expeditions or topics (from Sasquatch to Sea Serpents, Yetis to Yerens, Giant Snakes to Thunderbirds), please contact me via email for my rates.

How can I learn about Momo, the Grassman, the Honey Island Swamp Monster, etc.?

There are many regional names for local Bigfoot-type creatures in North America. When my next new book (which is already written) is published in April 1999, hopefully some sense will be made of the many seemingly different kinds of hairy hominoids. Until then, I will begin to carry, at my website’s bookstore, a selection of small press and regional books on these varied types of creatures.

Where are your columns published?

I have written for The Anomalist, as well as other journals and magazines. I have a regular cryptozoology column “On the Trail…”, every other month, in the London-based *Fortean Times.* I also have a more general column about matters unexplained or forteana, “Mysterious World,* in the national magazine, *Fate.* Some “Mysterious World” columns cover cryptozoological topics as with a recent one on the names for Bigfoot, and another one on the reports of a 1700s’ werewolf which some felt might have been a striped hynea. I formerly had a regular column in *Strange Magazine* called “The CryptoZoo News” – and it may be found in back issues of that magazine.

Do you think Komodo Dragons could be responsible for some other location’s monster reports? Could dinosaurs really be in Africa? What do you think of lake monsters in Lake Champlain?

And many other related inquiries. I remain skeptically open-minded about a wide variety of sightings and encounters. Obviously, in investigating this material, one must look for the most mundane answer first. However, to explain cryptozoological sightings in terms of even more extraordinary feats of known animals’ behavior or distribution makes almost as much sense as saying that Bigfoot are stepping out of flying saucers. Good science is still important to these examinations, and we all must be careful about jumping to conclusions just because the answers are not coming easily.

Have you heard of a theory linking a certain latitude and the sightings of mysterious lake creatures? Any references or suggestions where to search?

The best summary of this can be found on page ten of Bernard Heuvelmans’s famous 1986 checklist: “Attention must be drawn to the fact that all these long-necked animals [so-called “Lake Monsters”] have been reported from stretches of freshwater located around isothermic lines 10° C; that is, between 0° C and 20° C (i.e., 50° F, between 32° F and 67° F) in both Northern and Southern hemispheres. One could hardly wish for better circumstantial evidence of their existence.” Source: Heuvelmans, Bernard. “Annotated Checklist of Apparently Unknown Animals with which Cryptozoology is Concerned,” Cryptozoology, 5: 1-16, 1986.

You mentioned a Chupacabra website – where is it? How can one find a Bigfoot site? The IVBC site? A Yeti one?

Where can one find out more about that hairy guy in the iceblock shown at state fairs, the Minnesota Iceman? Instead of giving you all of the links here (several will be visible nearby on this website, of course), I would suggest the easiest way to find any of these sites (including info on joining IVBC) is via a Search Engine such as InfoSeek or AltaVista. These will be very up-to-date, and give you many choices to meet your individual needs.

You coined the words “Dover Demon,” “Phantom Clowns,” “Mystery Kangaroos,” and other weird phrases. Can you give me an update on them?

Since *Mysterious America* was written in the early 1980s, I have tried to keep readers of my later books and columns informed as to the latest happenings of all these critters. The Dover Demon, seen in Massachusetts in 1977, may be related to sightings of other small creatures like it. Despite a new theory going around that it was merely a newborn horse (a story we checked out at the time), the Dover Demon remains a real “Unexplained.” Some of the other mysteries continue to repeat in different times and places, and keep all of us guessing.

Do you know John Keel? Bernard Heuvelmans? Did you know Ivan T. Sanderson?

Several people ask me these questions. Yes, being in the field for as many years as I have been, I’ve known or written or talked with over the phone, hundreds of researchers, the famous and the infamous. While I’ve known a lot of “names” over the last four decades, I find that the witnesses, the local investigators, the gas station attendants, the librarians stand out in my mind just as much as my colleagues around the world. Many young people that I have helped with term papers help me remain youthful myself, and I never tire of assisting students anywhere with yet another question like…”Do you really think there is a Loch Ness Monster?” They are often shocked when I answer: “Of course, not…I accept the fact there many be several!”